Welcome to the 20th AGM of the Ball Clay Heritage Society.

As usual I would like to update you with what the Society has been doing over the last twelve months.

The General Committee met in July and November. There has been no change in the members of the Committee. However we have been saddened by the death in December of George Copp who had been manager of the North Devon Clay Company. He was a highly respected member of the local community and an invaluable source of information on the history of ball clay industry in North Devon.

At our last AGM the Revd. Nicholas Pearkes gave a splendid talk on the Lost Mine of Penn Recca and the Lost Canal of Littlehempston, which was a lesson in how a once thriving mining concern could vanish almost without trace. In May Richard Harris gave us a very interesting talk on the Hackney Canal and Quay. Unfortunately there are not too many traces left of those facilities either. We had hoped to organise another visit in the autumn to Wolf Minerals tungsten mine and processing facility but the company has gone into administration and it too seems to be going the same way as the Lost Mine of Penn Recca.

Luckily the ball clay industry is far from disappearing! In July a group of members were given a tour of Sibelco’s Preston Manor a 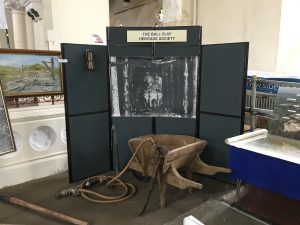 nd East Golds works and were very impressed by the dramatic expansion of the pits at Preston Manor following the closure of the Chudleigh Road. Last year Darrin Hewings organised one of our steel underground mining wagons to be placed by Sibelco on the ‘Clay Pits’ roundabout, and he has now added our underground mining machine which he arranged for volunteers to re-assemble. I think the installations have made quite an impact.

An earlier piece of equipment used underground was the humble wheelbarrow and we have been given by Teignbridge District Council the wheelbarrow that Simon Cunningham, a former TDC ranger, reconstructed from the iconic image of Geoff Gibbs and Les Bickham working in Bill Tribble’s shaft in the early 1950’s. In recent exhibitions we have used the wheelbarrow, a pneumatic spader and other artefacts in conjunction with a large reproduction of the iconic image to give a strong impression of conditions that used to exist underground.

We would like to reconstruct the ‘crab’ mining headgear that used to be at the Abbrook social club and is characteristic of South Devon ball clay, but we are currently lacking details of its original dimensions.

The Society’s archive collection has been considerably enhanced during the past year by the important donation by Sibelco of 16 boxes of Watts Blake Bearne title deeds which the company no longer requires because all its titles have now been registered. The deeds relate to dozens of parcels of land in Kingsteignton and Newton Abbot and are of considerable local historical interest. I am familiar with most of them as one of my first jobs when I joined the company in the 1970’s was to go through them all and fit together the ‘jigsaw’ of the company’s landholdings. Particularly valuable are a couple of boxes of very old deeds going back to the end of the 18th and early 19th centuries, which I believe no one has seen in recent times. Some relate to the earliest clay merchants and the partnership formed by Agnes Watts, William Mortimer, Samuel Whiteway and John Hatherly, that was based partly on land at Abbrook acquired in the 1820’s from the financially stretched George Templer.

Other acquisitions during the past year were four bricks produced by the Marland Brick and Clay Works in the 19th century, presented to the Society by Michael Messenger, and a very fine painting of a vessel called the ‘Bonawe’ loading ball clay at Poole quay from a barge moored alongside – the same system that was used for transferring clay from barges to vessels in Teignmouth Harbour. The painting was made in the 1920’s and as far as I know it is the only known work of art depicting the transport of ball clay.

Conversion of the former St Leonard’s church in Newton Abbot to ‘Newton’s Place’ is well in hand. Discussions have been held with Felicity Cole, the museum curator, on what items from the Society’s collections could be included in a ball clay exhibit there on a more or less permanent basis, and she is considering this with the designers. She is offering the Society the opportunity to mount a temporary exhibition in August 2020 in rooms that at other times of the year will be used by the Town Council. Unfortunately there will be insufficient space in Newton’s Place for the Society’s archive collection that is currently in the cellar of my house. However on a visit by Bryn and me to Devon Heritage Centre in November it was confirmed that the Centre was willing to accommodate the collection, although I suspect that they may be selective in what they take. Photographs could also be accommodated but the Society’s artefacts would have to go to Newton’s Place.

The Devon Remembers project was completed last year with the publication of the book “Devon During the First World War” containing 22 chapters summarising the individual research projects, including one on the ball clay industry put together by John Ellis, Richard Harris and myself. The leader of the Devon Remembers project, Katherine Findlay, published her book on “The Icelandic Adventures of Pike Ward” based on the diaries of the 19th century founder of the Teignmouth shipbroker of the same name. During his long visits to Iceland his redoubtable mother Elisa ran the shipbroking business. Katherine found in our letter books much friendly correspondence between Elisa and Charles Blake of Watts Blake Bearne, and I understand that Lou Bagnold, the chair of Teignmouth and Shaldon museum, intends to make use of it in a book that she is planning to write about Elisa Ward – who, incidentally, was a Pike from Chudleigh and was probably related to the Pike from Chudleigh who founded Pike Brothers, the Dorset ball clay producer.

Steve Carreck is making slow but steady progress with the conversion of our www.clayheritage.org website to WordPress. The website continues to generate interest and enquiries – such as from the American asking who he should contact in the USA to obtain ball clay for making clay tobacco pipes. We would like a volunteer to take on the job of managing the website and we have not yet manged to restart the publication of our newsletter or the formal cataloguing of our photographs following the sad loss of Tony Vincent. However Darrin has organised regular sessions with retired clay workers to go through our photographic collection and identify people and places appearing in them. Darrin and Bryn have given a number of talks to local groups on the history of the ball clay industry.

We welcome your comments and suggestions regarding what the Society does or should do. We would especially like your views on future talks and outings. Anyone interested in researching or just browsing through our collections of archive material and photographs will always be very welcome at Dunderdale Lawn.