Ball clays are found in articles used daily by millions of people around the world – usually without them realising it! They are essential components of most types of pottery. They are easily mouldable and are white or near white when fired at a high temperature: ball clays are truly ‘fine ceramic clays’.

The name ‘ball clay’ derives from the former method of winning the clay by cutting it from the floor of an open pit in cubes. Because of the clay’s high plasticity the cubes held together, but after being handled several times the corners became knocked in and the cubes turned into balls – so, to the potters, a plastic, white firing clay was a ‘ball clay’.

Unlike china clays – with which they are sometimes confused – ball clays are rather rare in the world.

What are probably the world’s most important deposits are found in Devon and Dorset. Ball clays from these deposits have been used by manufacturers of white-bodied pottery since the days of the famous 18th century potters such as Josiah Wedgwood, Astbury and Spode. Nowadays these ball clays are shipped to over 80 countries around the world to the manufacturers of tableware, washbasins and toilet bowls, wall and floor tiles, electrical insulators and other ceramics. 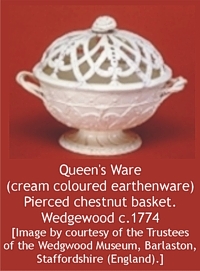 Ball clays consist of ultra fine clay particles. This helps to make them sticky (or ‘plastic’) and easily shaped when damp (the word ‘clay’ is derived from the Old English ‘claeg’, meaning sticky). Some also have fluid properties that are valuable in the casting of large ceramic pieces such as toilet bowls. Like china clays (which are also called ‘kaolins’), English ball clays contain a large proportion of the mineral kaolinite and fire hard in the potter’s kiln. However, china clay particles are much coarser. Consequently, unlike ball clays, china clays are not generally plastic.

Most types of ‘whiteware’ pottery contain both ball clay and china clay. The ball clay helps to shape the piece, adding ‘green’ strength to the body before firing, whilst china clay provides extra whiteness.