‘Adit’ or ‘Inclined Tunnel’ mining, which had been introduced in the 1930’s, largely replaced vertical shaft mining during the 1950’s and 1960’s. 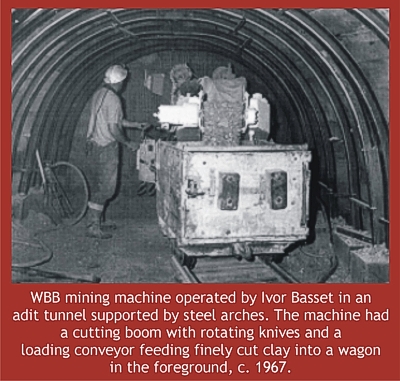 Pairs of tunnels in South Devon and single tunnels in Dorset were driven into the ground at a shallow angle following a particular seam from close to its outcrop to a considerable depth. A retreat method of working was then followed. Rails were laid in the drives so that wagons winched from a surface gantry could be used to haul the clay underground – replacing wheelbarrows – up to the surface. To maintain ground support over the years and in view of the increased tunnel size, the main drives were supported either by squared timbers or by steel arches or rings with timber backing boards. During the 1960’s, leading up to the Queen’s Award for technical innovation, the adit system was greatly improved with the introduction in South Devon of hydraulic mining machines (that greatly reduced the use of pneumatic spaders), of submersible pumps and of steel wagons with automatic tipping at the surface.

The inherent greater safety of twin adit tunnels compared with a single mine shaft was augmented by the implementation of the 1954 Mines and Quarries Act, the banning of smoking and naked lights underground (ending the miners’ traditional candle-heated fried breakfast) and the training of mines rescue and first aid teams. 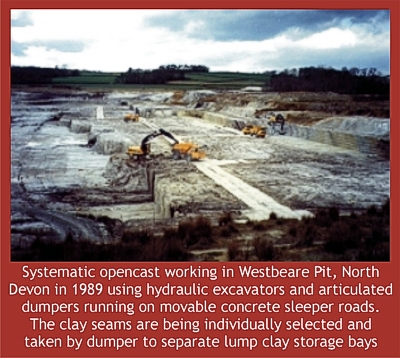 Having been the principal means of working for most of the industry’s history, underground production was completely replaced by opencast working in North Devon by the mid 1970’s and reduced steadily in South Devon and Dorset during the 1980’s and 90’s when the company sawmills were closed, until the last ball clay mines closed in 1999. Nowadays all production is from progressively larger and deeper pits using powerful hydraulic excavators and dumpers.