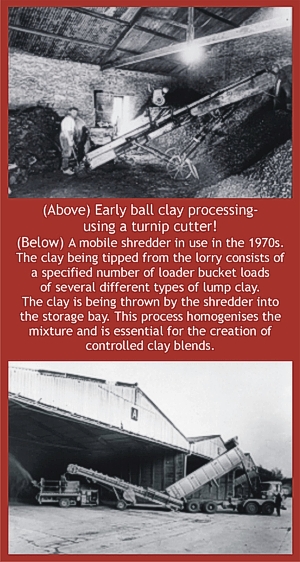 Traditionally, ball clays were sold ‘as dug’ in lumps or ‘balls’ – the ‘potters” clays usually being ‘weathered’ for several months in outside heaps. The clay producers did some very crude selection and mixing of what they perceived to be good and bad examples of individual clay types. The potters often bought in a variety of clays and mixed them together to their ‘secret’ formulae to make the pottery body they wanted.

This procedure continued virtually unchanged until the widespread adoption in the 1950’s of the ‘shredding’ of clay into small pieces – a process first introduced in the1930’s that originally used mobile turnip cutting machines (see photograph, right). Shredding makes handling much easier and, most importantly, enables the clay producers to blend together up to 20 or more different seams of clay, often from different production areas. This has helped them to compensate for the natural variation in individual seams and to produce blends that are consistent and meet their customers’ specifications, especially for faster casting and faster firing.

The development of powdering during the 1950’s facilitated the sale of ball clays into non-ceramic applications such as rubber, fertilisers and animal feeds. Shredded clay is fed into an ‘Atritor’ mill together with hot air. The mill contains rotating shafts with pegs that break up the clay pieces. The hot air stream dries the feed clay from its natural 15-18% moisture down to a 2% moisture powder. The product is passed through an air classifier to remove any coarse particles and is then either bagged in paper sacks or delivered in bulk powder tankers. 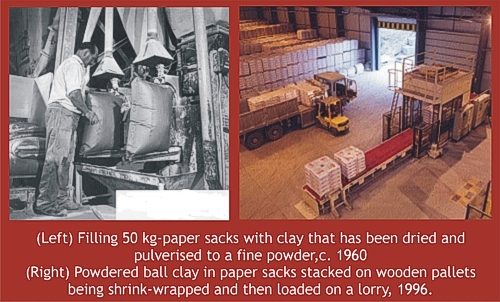 The desire to produce controlled products for particular applications whilst optimising the use of marginal clays led in the 1970’s to the development of ball clay refining using automated computer-controlled process equipment. Clays with too much lignite are made into a wet slurry and the excess lignite particles are removed by fine screens (sieves); clays with too much quartz sand are powdered and the excess silica removed by air separation. The resultant refined slurry and powder are mixed together into a paste, extruded in ‘noodles’ and dried for bulk handling. The product is also sold in a liquid or ‘slurry’ form. 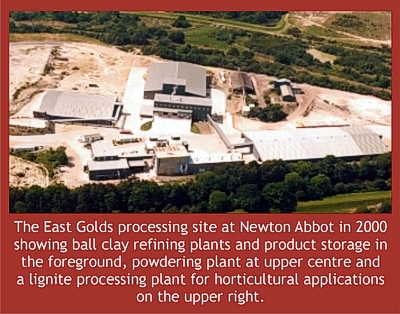 For many years ball clay companies produced ‘prepared bodies’. These are the various mixtures of minerals (such as ball and china clays, silica, feldspar etc.) that normally the potter prepares and then shapes, decorates and fires. WBB also produced ‘calcined’ clays – pelletised ball clays fired in a rotary kiln and then ground down and incorporated in a pottery body. Having already been fired, calcined clays reduce the expansion and contraction of the body when it is fired as a finished ceramic.

Enormous changes in working methods occurred in the ball clay industry in the second half of the 20th century – especially during the 1960’s. Highly regarded ‘productivity agreements’ provided for these changes to be accompanied by the adoption of progressive employment practices, for which the companies became well known. These included the replacement of piecework and overtime pay systems by ‘staff’ conditions of employment for all employees, with fixed rates of pay and hours of work, pensions and sick pay. They were combined with systematic training and great emphasis both on health and safety and on employee communication and involvement. The success of these arrangements depended on the high degree of trust that developed between management and employees. 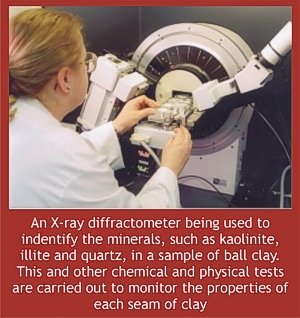 The development of these progressive employment practices created an environment in which the workforce was willing to respond positively to the changes taking place and to develop their skills through the training opportunities offered. As the physical demands on the workforce diminished, the roles of maintenance fitters and electricians became more important. Production increasingly required the close collaboration of multi-skilled teams of geologists, drillers, surveyors and quality control chemists working closely with process engineers, ceramists and technical sales personnel to assess how best to fulfil customers’ needs with the complex sequence of clay seams in the ground and use of the appropriate processing facilities.