This lovingly restored clay wagon has become a popular landmark in Kingsteignton. After many years of underground service, the wagon (which retired in 1999) is now permanently installed on the roundabout at Clay Pits Way. The wagon’s endearing messages – which change periodically – are a source of delight and amusement for local folk. Whilst working underground in the later part of the last century, these messages would have been functional, to indicate clay type (DA for ‘Dark Alum’ or LB for ‘Light Blue’ as pictured below), but today the messages are purely social; a cheery greeting for local resident Auntie Viv for example.

The wagon first appeared on the roundabout in 2017, and was later joined by an underground mining machine, both of which were restored by local clayworkers. Standing side by side as they now do, the wagon and accompanying mining machine replicate their original assembly underground, with the clay feeder positioned above the wagon.

As a lover of all things clay, I visit the wagon on a regular basis, and am always thrilled to see a new message or dedication. Nick-names, celebratory greetings and football related initials (specifically Liverpool) often appear. Darrin Hewings, who organised the installation (and is responsible for the codes and messages) has plans to install a third piece of machinery, of which I will keep you informed. In the meantime drive by – visit the wagon and experience an open-air tribute to the history of underground mining. 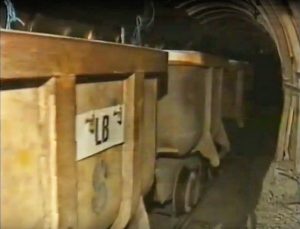 Wagons on their way down the mine. The initials LB – ‘Light Blue’ denote clay type. 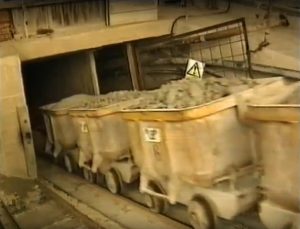 The same wagons return to the surface laden with ‘Light Blue’ clay.

With special thanks to Quarry Manager, Darrin Hewings for sharing his industrial knowledge and expertise.