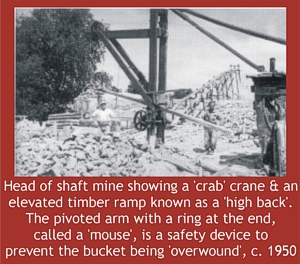 In South Devon the square pit system evolved by stages into true underground mining. First the claycutters started to rob a small area of the seam adjacent to the bottom of the pit – giving the pit a bell-like shape. Then short timbered levels were driven out from the base of the pit. This focused the operation on extracting a particular seam and on minimising the amount of material to be dug to reach it, which meant changing from digging a wide square pit to digging a vertical shaft wide enough simply to accommodate the bucket, ladders and pump lines.

By the 1870’s underground shaft mining was enabling large quantities of deeper clays to be worked in all three production areas. By the end of the century the availability of Cornish pumps did away with the depth limitations of hand pumps. As a result, shafts could then be used to extract potters’ clays at a depth of 50 to 150 feet (15 to 46 metres) – the greatest depth reached being 200 feet (61 metres) – whilst square pits and open pits remained in use to work the shallower stoneware clays.

Typical cross section dimensions of the shafts were 9 feet x 4 ½ feet (2.75 x 1.37 metres) and 13 feet x 6 feet (3.96 x 1.83 metres). The horizontal frames of larch supporting the sides of the shafts were separated vertically by timber ‘studdles’ between which boards and ‘vraiths’ or ‘wreathes’ of sedge grass or heather were rammed to hold back the sands through which the shafts were frequently driven. The shafts were divided into two compartments, one for hoisting by means of a crab and one for the access ladders and pump lines. 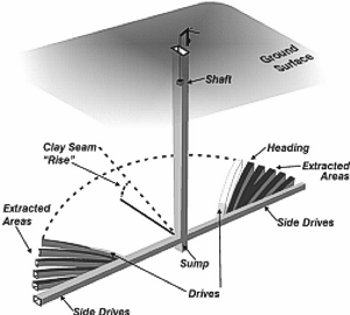 aving reached the desired seam and established a sump at the base of the shaft two side drives (tunnels) supported by closely set green round larch timbers would be driven up to 100 feet (30 metres) in opposite directions from the base of the shaft through the level ‘strike’ of the seam. Traditionally, the seam would then be worked in a ‘fan’ shape by cutting further timbered drives from the base of the shaft, predominantly on the ‘rise’ side (where the seam sloped upwards). The drives were usually only 5 ½ feet (1.68 metres) high and 4 feet (1.22 metres) wide. Clay would squeeze through the timber supports, and a worked out drive would soon collapse under pressure from the ground above when the timber was withdrawn for re-use. The life of a shaft was rarely more than two to three years.

Because of the poor ventilation, normally only four miners at a time worked underground. A miner at each of two ‘headings’ cut the clay with a tubil. Another miner in each heading barrowed the clay down the drive to the base of the shaft using a heavy-duty elm wheelbarrow, typically carrying about 3 hundredweight (136 kg). The miners worked in what were, by modern standards, appallingly unsafe conditions – by candlelight and sometimes ankle deep in water. In many mines there was the ever-present threat of a sudden water inrush and the ignition of ‘fire damp’ methane gases. Nevertheless, records of serious accidents (as distinct from singed eyebrows!) are surprisingly rare. 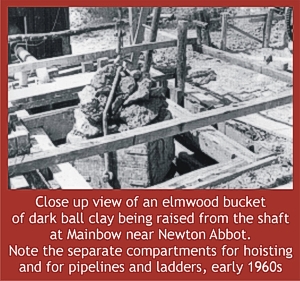 The ‘top-ganger’ – who was in charge of the gang working in the mine – operated the crab at the top of the shaft. The buckets carrying about 7 hundredweight (317 kg) of mined clay or waste were hoisted by wire ropes connected via overhead pulleys to steam engines or, later, DC electric motors in remote winch or drum houses that served several mines. Water wheels and turbines powered some Cornish pumps and hoists. The ganger controlled his rope hoist by means of a lever and long pull wire connected to a drum in the winch house, which he could engage against a continuously revolving shaft. Clay from the hoisted bucket was discharged into wagons. A ‘top trammer’ was responsible for the haulage of the wagons (by wire ropes from the winch house) up elevated timber ramps known as ‘high backs’ and the discharge of the clay and waste into separate heaps. The screeching of the ubiquitous wire ropes in their pulleys was the characteristic noise of the ball clay works. 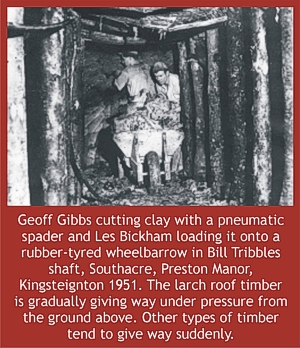 Several companies established their own sawmills (replacing earlier saw pits) for the specialised cutting of the considerable quantities of mining timber that were required. One company even became involved in forestry. Skills such as those of the blacksmith (who forged the claycutters’ tools), carpenter and rope splicer were essential in support of the claycutters. The claycutters’ work – both in the pits and underground – was extremely arduous. Considerable physical strength was required to extract and man handle the clay, often in soaking wet conditions. A miner’s pay depended on the tonnage produced by him and his gang (so-called ‘piecework’), but the pay was generally good so that, for generations, sons followed their fathers down the mines. Strength of character, prodigious cyder consumption and powerful tug of war teams were characteristic of the claycutters – as was rheumatism! 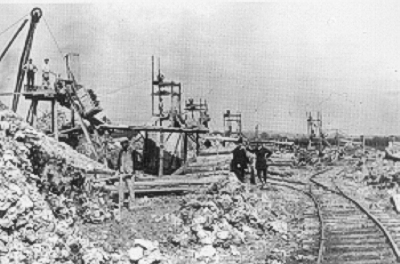 By the end of the 19th century shafts in North Devon were being sunk with a steep incline of 75 degrees from the horizontal, enabling wagons to run underground and be hauled to the surface on rails in the shafts. The tunnels of the North Devon Clay Co. were lined with bricks made at the adjacent Marland brickworks.