Old ball clay workings often show an astonishing biodiversity that is far greater than existed on the farmland before the ball clay working began. When – in the past – the old, shallow workings were finished the land was either restored to farmland or it was abandoned. In the latter case the pits themselves quickly filled with water and the surrounding areas soon re-vegetated. This resulted in the creation of havens for many species of increasingly rare flora and fauna – notably dragonflies and butterflies. 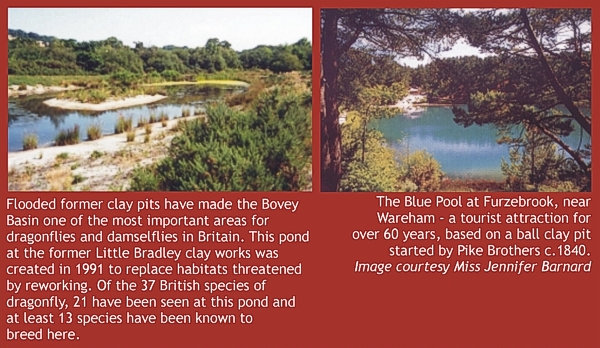 Several of the old workings have become nature reserves managed by the Devon Wildlife Trust and have been the subject of TV films by Peter Scott and Andrew Cooper. Others have become ponds and lakes for amenity, coarse fishing and boating. The best examples are the famous ‘Blue Pool’ near Wareham and Decoy Lake in Newton Abbot, which also have nature trails open to visitors.

Since the merging of the 15 ball clay companies into two by the end of the 1960’s, workings have been rationalised and fewer, much larger, pits have been developed. The industry was amongst the first to take measures to mitigate the inevitable impact that its workings have on the environment, and tip design and landscaping continue to improve within the framework of long term plans agreed with the local planning authorities. 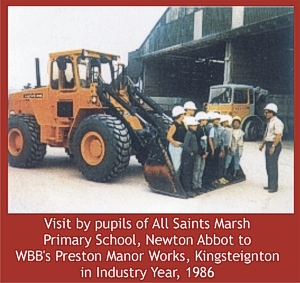 In far-sighted recognition of ball clay’s national importance and scarcity, special planning safeguards against the sterilisation of ball clay reserves by housing and other development have been in place since 1953. However the balance to be struck between the interests of working an internationally rare and useful mineral where it lies and preserving the existing local environment has become an increasingly prominent issue, especially in Dorset, where the deposits lie in areas with some of the highest landscape and nature designations.

With annual ball clay production at the beginning of the 21st century running at over one million tonnes, and with the enormous deposits, particularly in the Bovey Basin, able to sustain production for at least another 50 years, this debate is set to continue.