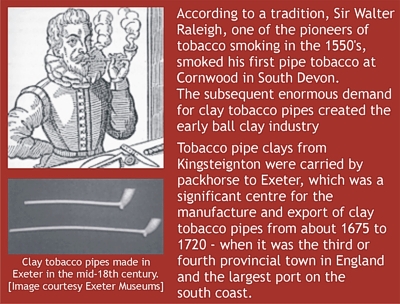 It is generally accepted that Dorset ball clays – and probably Devon ball clays too – have been used since Roman times to make crude pottery. However it was the introduction of tobacco to England in the 16th century by Sir Walter Raleigh and the need for a suitable clay with which to make tobacco pipes that led to the start of the modern ball clay trade.

Although the highly plastic ball clays were ideal for tobacco pipe manufacture, their expansion and contraction during firing made them difficult to control in tableware manufacture. Most pottery was made with easy-to-use local coloured clays. By the 17th century it was common for jugs, bowls and other tableware made with these clays to be covered with either a thick white glaze (as in Delft ware) or a white clay slip coating. From at least the 1650’s potters in Bideford were using a white slip of North Devon ball clay and scratching designs through the white slip, exposing the coloured body beneath.

Shipments of Dorset tobacco pipe clays from Poole were significant by the 1630’s and were the port’s most important cargo for most of the 17th and 18th centuries, especially to London and many south coast ports. By 1662 the trade had become sufficiently important for an Act to be passed forbidding the export of pipe clays to foreign countries. Shipments of North Devon clay through Bideford were also important in this period, especially to pipe manufacturers in Bristol, but shipments of South Devon clays seem to have been relatively small until the middle of the 18th century. 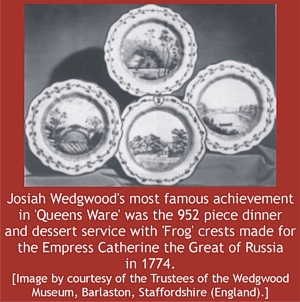 Whilst the Chinese learnt how to make fine white porcelain many centuries ago, it was only in the 18th century that European potters learnt how to make good quality white-bodied pottery. They had to overcame the difficulties of using white firing plastic ‘tobacco pipe’ clays, and had to both discover and learn how to use china clays with little plasticity.

It was the achievements in this area by the famous early potters in Stoke-on-Trent such as Wedgwood, Astbury and Spode that caused the demand for ball clays to take off – along with the demand for china clays. They all needed ball clays from Devon and Dorset – as well as china clays from Cornwall and Devon – to make their fine ‘cream wares’, ‘Queen’s Ware’ and so on.

A typical recipe for such pottery could have included equal quantities of ball clay, china clay, flint (a form of silica) and Cornish Stone (a source of feldspar). Between 1765 and 1785 – at the same time as the industrial revolution in the manufacture of pottery and the associated ‘canal mania’ – the annual shipments from South Devon quadrupled to almost 10,000 tons. 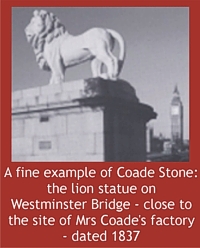 One of the lesser-known early applications of ball clay was in the production of a high-grade ceramic known as Coade Stone. This was first produced in London in 1770 by a Mrs Coade from Lyme Regis. It was an architectural ceramic of high artistic and technical quality that has been found to be an exceptionally durable, artificial ‘stone’ for building decoration and statuary.

Examples include friezes on Buckingham Palace, fan vaulting in St George’s Chapel, Windsor and the Lion Statue on Waterloo Bridge. A recent detailed scientific analysis of the ‘stone’ has confirmed that ball clays from Devon or Dorset were the major component, together with pre-fired clay. Mrs Coade died in 1825 and production had ceased by about 1840. 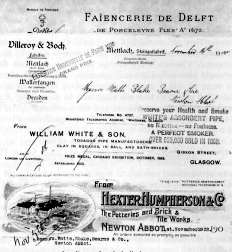 By the second half of the 19th century the ban on exports had been lifted and an increasing proportion of ball clay production was exported to potteries in Europe – from Kuznetzov in St Petersburg to Villeroy & Boch in the Saar, Porceleyn de Fleys in Delft and Pickman in Seville. (Samples of letterheads of early ball clay customers are shown on the right).

With the development of potteries in the USA and Canada, mainly by potters from Stoke-on-Trent who had been brought up on English ball clays, North America also became a very important market. The English ball clay industry became an extremely cosmopolitan business with a string of long-standing trading relationships that in many cases have continued to the present day.

Thanks to its coalfields and its concentration of potting expertise, the Stoke-on-Trent area has for centuries been the main centre in the UK for ceramic production – and therefore of ball clay usage. 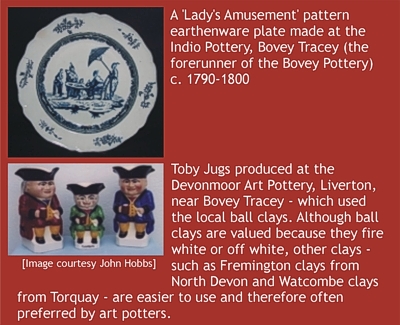 However, several important ceramic factories were established close to ball clay production. Some, notably the Bovey Pottery in Bovey Tracey in Devon and Poole Pottery in Dorset, produced tableware on a large scale. Others used the less valuable stoneware clays to produce the pale cream bricks that are a feature of many West Country buildings, as well as drain pipes, chimney pots and wall tiles – notably Candy & Co. (latterly British Ceramic Tile) in Heathfield, Bovey Tracey, Hexter Humpherson in Newton Abbot and the Marland brick works in North Devon.

In the late 19th and early 20th centuries clusters of smaller art potteries were established near the ball clay areas – such as the Watcombe, Torquay Art, Aller Vale and Devon Tor Potteries in South Devon and the Bideford and Barnstaple potteries in North Devon. However, with a few notable exceptions, such as Devonmoor Art Pottery in Liverton, they used mainly red or brown firing clays from, for example, Watcombe and Fremington, rather than ball clays.

The 20th Century: from Depression to Remarkable Growth 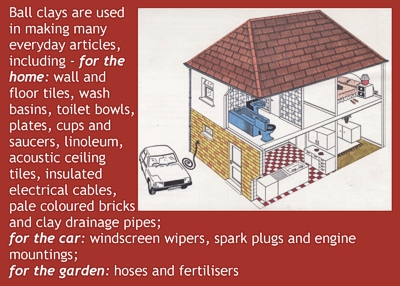 The two World Wars and intervening Great Depression affected the ball clay industry badly. By 1945 production was just 90,000 tons. In America the ball clay deposits of Tennessee and Kentucky were opened up. However, after the Second World War the industry in Devon and Dorset enjoyed sustained growth. Post war reconstruction in the 1950’s created strong demand in Britain and Northern Europe for clays for sanitaryware and tiles. This was followed in the 1960’s and 1970’s by strong growth in Italian and Spanish ceramic production. The 1970’s and 1980’s saw the emergence of valuable new markets in the Middle and Far East, and in the 1990’s further growth in ceramic tile production.

Since the 1950’s ball clay has also been used in a wide range of non-ceramic applications, for example in coating fertiliser ‘prills’ (pellets), as a filler in rubber and linoleum and as an extender in animal feed stuffs. By 1970 annual sales had grown to 700,000 tonnes, and by 2000 to just over 1 million tonnes, more than 75% of which was exported – an achievement recognised in the several Queen’s Awards for exports that were awarded to the clay companies.

The History of Ball Clay production >