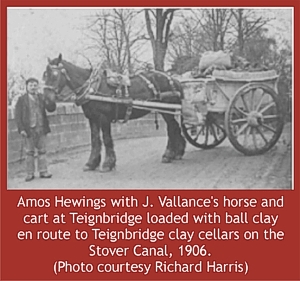 The history of ball clay is bound up with the development of canals, railways and shipping which have all played a vital part in transporting clays economically to customers.

Packhorses and, later, horses and carts were the only methods of getting clay away from the pits until the advent of railways and lorries. However, it was only practical to use packhorses and carts over short distances. Fortunately, each of the ball clay deposits is reasonably close to a port from which the clay could be transported by vessel to such ports as London, Bristol and Liverpool and Runcorn on the Mersey (for the Staffordshire potteries via the Bridgewater Canal and Josiah Wedgwood’s Trent & Mersey Grand Trunk Canal), as well as continental European ports.

In South Devon the port for ball clay was Teignmouth. The first recorded shipment from Teignmouth was to Plymouth in 1691, shortly after William of Orange was proclaimed king in Newton Abbot in 1688. Originally, packhorses carried the clay from the pits to Hackney quay at the head of the Teign estuary where it was either loaded directly into small sailing vessels or taken by barge to larger sailing vessels moored in Teignmouth harbour. 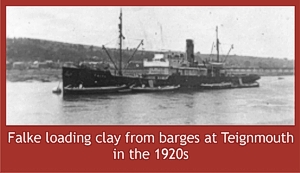 The high cost of the packhorse journey was greatly reduced by the construction of the Stover Canal from the Teign estuary to Teigngrace by James Templer II in 1790-1792 and of the Hackney Canal from Hackney quay into Kingsteignton for Lord Clifford in 1843. Clay cellars were built on both canals for the storage of clay prior to shipment. At about this time the Earl of Devon’s ‘Devon Wharf’ (now the ‘Town Quay’) in Newton Abbot started to be used to load barges with clay from his newly opened Decoy pits. The barges had characteristic square ‘Viking’ sails but were latterly towed in the estuary by the steam tug ‘Kestrel’ and finally by the paraffin engine tug ‘Heron’. 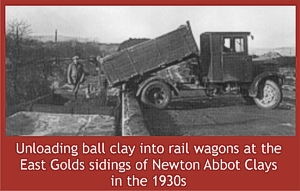 The construction of the Moretonhampstead branch railway line in 1867, with sidings at Teignbridge and East Golds, enabled the railway to be used increasingly to supply domestic customers. However, the introduction of lorries, enabling clay to be carried far more economically than by cart and barge, led to use of the canals ceasing in the 1930’s and of the railway in the 1980’s.

The main outlets for ball clay in North Devon were Bideford Quay and, for a period, Fremington Quay on the Taw estuary. The first recorded shipments of tobacco pipe clay from Bideford were in the 1650’s. However, after the initial century or more of activity, the high cost of the packhorse journey from the pits at Peters Marland (relative to transport costs in South Devon and Dorset) seems to have led to the closure of the works in the early 19th century. The situation was improved by the construction in 1827 of Lord John Rolle’s Canal up to Torrington. It was transformed in 1881 when the eminent railway engineer, J.B. Fell, commissioned by Marland Brick & Clay Works Ltd., completed a 3-foot (91cm) gauge light railway from Peters Marland to Torrington – including a remarkable wooden viaduct over the River Torridge.

Eventually, in 1925, a standard gauge railway was built along the course of the narrow gauge one, enabling clays from both Peters Marland and Meeth to be shipped out of the rail-connected Fremington Quay until the closure of the line to clay traffic in 1982. Now, once again, Bideford Quay is regularly used for clay shipments.

The harbour at Poole was used for the shipment of ball clays from Dorset. Until the 19th century the clay was carried by packhorse or cart to Wareham Quay on the river Frome or a loading point on the edge of Poole Harbour. From there it was barged to Poole where it was transferred to sea-going vessels for shipment to Runcorn, London and other ports. In 1805-6 Benjamin Fayle built the first railway in Dorset: a pioneering cast iron ‘plateway’ along which horses hauled wagons of clay from his pits at Norden to Middlebere Pier. In 1907 ‘Fayle’s Tramway’, a 3 foot 9 inch (114 cm) gauge railway from Newton to Goathorn Pier using steam locomotives, was extended to Norden and the plateway was closed. The other producers, Pike Brothers, operated a 2 foot 8 inch (81 cm) gauge railway from Furzebrook to Wareham Quay. From its arrival in 1884 the main line LSWR line was used to transport clay to domestic customers. The private narrow gauge railways continued until 1954 when the two companies were amalgamated and transferred all local movements to road transport. 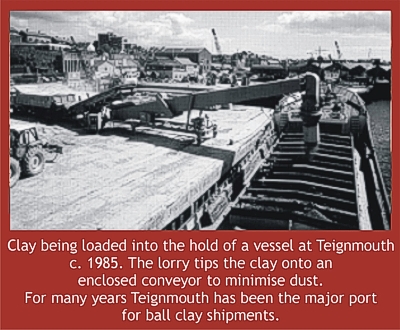 Nowadays ball clay for European and Mediterranean markets is generally hauled by lorry to the ports of Teignmouth, Bideford or Poole, whilst clay for other parts of the world is generally shipped in containers that are filled at the clay works and transported by lorry to deep-sea container ports such as Southampton, Felixstowe and Thamesport.