How the Clay Companies Evolved

For most of the 300-year history of the ball clay industry the great landowners owned much of the land on which the clay was worked. This was especially true in South Devon. In Kingsteignton the landowners were the Bishop of Salisbury and the Cliffords of Ugbrook. In Newton Abbot they were the Earls of Devon and around Stover they were the Templers and the Dukes of Somerset. Whilst they granted mining leases over their lands to clay merchants they generally avoided getting involved directly in the business of mining and selling the clay – although both James Templer II and Lord Clifford were evidently sufficiently satisfied with the benefit they derived from their clay leases to build the canals mentioned earlier. 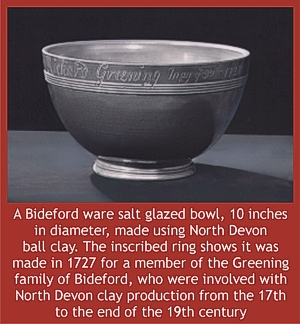 Some of the most enterprising clay merchants acquired the freehold of important clay bearing land from the traditional landowners – often in addition to having long mining leases. The Greenings in North Devon controlled parts of what became the Marland North Devon clay works as early as the 1650’s. The Pikes (from Chudleigh) followed in Dorset over 100 years later, leasing land from the Bond and Calcraft estates, and in 1760 formed Pike Brothers, probably the first partnership of clay merchants. Benjamin Fayle followed in Dorset, establishing Benjamin Fayle & Company in 1795.

In South Devon, the Watts family acquired key landholdings and a valuable lease from the Bishop of Salisbury, which they brought into a partnership with Whiteway in 1796. Serious competition started for Whiteway, Watts & Co. in 1856 when the Devon and Courtenay Clay Company was formed with a lease of the Decoy property from the Earl of Devon. In 1861 the Watts family broke away from the Whiteways and brought their extensive clay properties into a partnership with Blake and Bearne, forming Watts, Blake, Bearne and Company, Whiteway, Watts & Co. then became simply Whiteway and Company.

In North Devon, William Wren, a descendant of Greening, brought life back into the industry there by establishing the Marland Brick & Clay Works Ltd. in 1879 – probably the first limited liability company in the ball clay industry – and built the vital Marland light railway from the works to Torrington. The North Devon Clay Company Ltd. took over the business on its incorporation in 1893.

After the Second World War there were more than 15 ball clay producing companies – most of them weak either financially or in terms of the reserves that they controlled. By 1969 they had been consolidated by a series of mergers and acquisitions into just two groups, Watts, Blake, Bearne & Co. (WBB) and English China Clays (ECC). These companies were able to rationalise the patchwork of freehold ownerships – allowing larger pits to be developed – and modernise production.

The Pochin Ball Clay Company and the Mainbow Clay Company had joined what became ECC before the Second World War. During the 1950’s ECC acquired the London, Australian company and Hexter and Budge. There followed in the 1960’s a ‘scramble’ between WBB and ECC to acquire the other companies. ECC acquired Meeth (North Devon) and Pike Brothers, Fayle (a merger of the two Dorset companies), operating its ball clay business under the name of Hexter and Budge and then as ECC Ball Clays. Following these acquisitions, ECC’s share of UK ball clay production was about 40%.

During the 1960s, WBB under Claude Pike became a public company, and acquired Devon and Courtenay (which had itself acquired Whiteway & Co.), Newton Abbot Clays and the North Devon Clay Company. As a result, WBB became the largest UK ball clay producer with a share of about 60 % of the total. Since 1990 WBB has operated in Devon through its subsidiary WBB Devon Clays Ltd.

From the mid 1970s to the mid 1990s, WBB took advantage of the UK industry’s technical advancement to became the world’s leading producer of various types of ball clays, acquiring or setting up ball clay production or processing operations in Germany (West and East), France, Thailand, China, the USA, Portugal, Netherlands, Indonesia and Ukraine. Since 1999 WBB has been wholly owned by SCR Sibelco SA of Belgium and has been joined with the former Hepworths sand division based in Cheshire to become WBB Minerals. Many of WBB’s overseas operations are now controlled by other companies in the Sibelco group.

Ball clays and the Environment >