A synopsis by Tony Vincent

The 3 ball clay deposits in SW England are unique in the UK and each is unique in itself. The geology, types of ball clay, occurrence and extraction methods are different in each of the 3 deposit, but they are all composed of the clay mineral ‘kaolinite’.

The name ‘ball clay’ comes from the early working methods, when the clay was cut into cubes using thirting spades, tubils (lumpers in North Devon) and poges. The photo below was taken in Candy’s Heathfield Pit in the 1920’s By the 1940s, the ‘balls’ and then slices were being cut with pneumatic spades until mechanisation, shredding and refining started in earnest in the 1950s and 1960s. 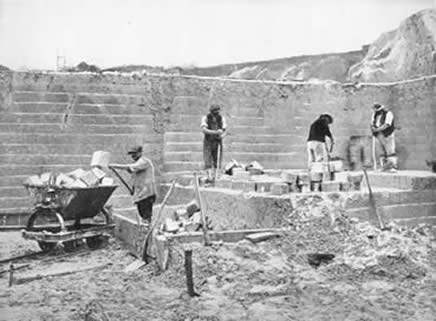 The Dorset deposits are the largest in area, but the shallowest in depth and occupy the extreme western part of the Hampshire basin. The Eocene Bagshot Beds contain 4 main clay bearing members, which occur over a wide area. However, it is in the Wareham Basin where most of the ball clay working has been located. The southern edge of the deposits is the upturned chalk, which forms an E-W escarpment through Corfe Castle. Against this southern edge, the ball clay lenses are also upturned, contorted, faulted and thrust, whilst further north the clay lenses level out. The Dorset clays were laid under estuarine conditions. Tropical to sub-tropical weathering of land surfaces consisting of mudrocks, sandstones and chalk some 40 million years, gave rise to kaolinite and sand. Sea level was varying and when sea level was low, there was erosion and little sedimentation. Rising sea level saw deposition of sand, but when it was at maximum, silt and clay were deposited. Ball clays are very fine grained and wouldn’t sediment without a process called ‘flocculation’. In this chemical process, the fine particles aggregate and act as larger particles. Reduction of pH in carbonaceous backswamp conditions is one mechanism, but in the case of the Dorset deposits the variable saline conditions, where the fresh river water met the saline sea water was the main cause of clay sedimentation. The clays often accumulated in depressions and channels eroded into the surface of the underlying sands. When sea level fell, general erosion took place leading to partial removal of the recent sediments, including the ball clays. Clay beds were also exposed in places and soil horizons developed. Where groundwater levels were low, oxidation occurred and the clays became mottled and discoloured, mainly by oxides of iron. Where the groundwater levels were high, the clays remained unstained and some of the included micaceous minerals were altered into kaolinite, thus improving the quality. These dynamic sedimentary conditions at the time of deposition explain the huge variation in quality and thickness of the beds from one place to another in the same clay member. The best occurrences from the point of view of economic extraction are found where deep estuarine channels were filled in, but subsequent erosion did not remove much material and where oxidation and staining did not occur, before burial by further sedimentation. In consequence, projection and extrapolation of deposits for prediction of further extraction areas was and is not an option. Each individual area had to be defined by its own close spaced drilling program. However, the detailed knowledge of the distribution of the 4 clay members allows such investigations to be focused.

The deposits of interbeddded sands and clays occur in the Poole Formation, which is overlain by thin superficial deposits of gravel and alluvium. There are 4 main clay members, each being interbeddded clays and sands, of which only about 25% is commercial clay’ usually occurring in the upper part of the member. The lowest of these is the Creekmoor Clay, which outcrops to the west and south-west of Wareham. The Creekmoor Clays are the highest in quality and account for 55% of the output. The next member is the Oakdale Clay, outcropping mainly to the north of Wareham and accounting for 15% of production. The third member is the Broadstone Clay, the most carbonaceous of the members, which outcrops to the south and east of Wareham. The top member is the Parkstone Clay, which has isolated outcrops to the north-west and to the south of Wareham and accounts for 15% of output. In general, the quality of clays deteriorate north-east of Wareham.

The complexity of the detailed occurrence is difficult to simplify. The diagram below, reproduced from a Pike-Fayle brochure circa 1960, provides a simplified picture. The main production area at that time was to the south of Wareham and measured 5 miles by 2 miles, but it must be realised that this was not a continuous ‘bed’, but the area that contained the separate patches of the best commercial clays, as determined by the sedimentary controls outlined above. 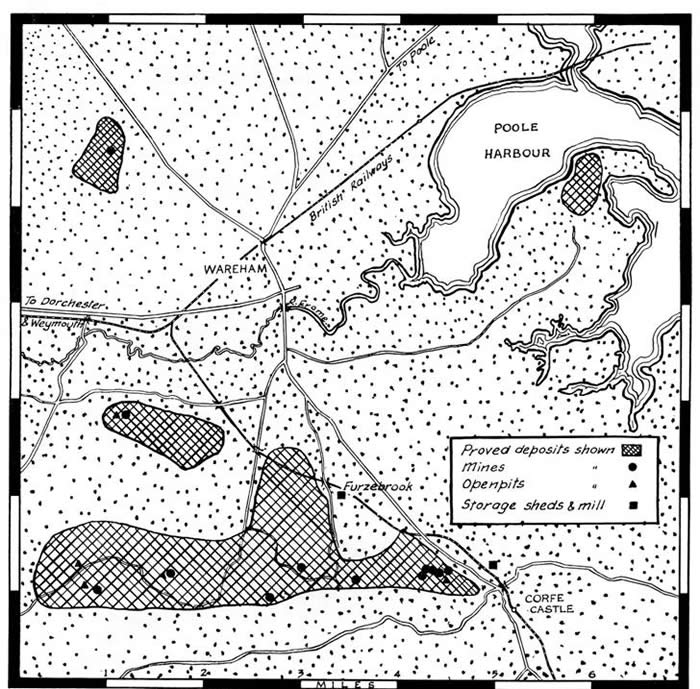 From about 1800, the two most prominent producers were Pike Brothers and Benjamin Fayle. In the late 1940s, the two companies merged to form Pike Bros., Fayle & Co. Ltd, who were taken over by ECC Ball Clays in 1969, the latter now being part of the IMERYS Group..

On the basis of a gravity survey, the Bovey Basin is the deepest with an estimated depth of more than 3600ft, the later sediments probably being of Oligocene age. The Basin can be divided into two geographical units; with the larger northern area being the most important. The latter forms a rough parallelogram stretching NW from Newton Abbot to beyond Bovey Tracey, a distance of 7 miles and has a maximum width of 4 miles. The southern area from Decoy to Aller contains Aller Gravels and Greensand as well as clay beds.I researched the sedimentation of ball clays in the Bovey Basin in the early 1970s. A number of conclusions were reached: 1) Sedimentation could only occur with flocculation and from turbid water without movement; 2) the sedimentary areas were only about half a mile or so in length and consisted of outwash fan, lake and backswamp. The result of this was sand at the entry end, into sandy clay, clay, carbonaceous clay and lignitic material, the latter being derived from the collected vegetation in the backswamp. As the focus of subsidence shifted, the sedimentary environments also moved to give intercalated seams of sand, clays and lignites. 3) The clay mineralogy is complex ranging from well ordered kaoloinite with little micaceous mineral to moderate disorder and higher mica content. 4) Initially the source of the clay mineral was thought to be Dartmoor and that is probably true for the ‘china clay’ like clays of the Chudleigh Knighton Member, showing derivation from the NW. However, despite various unconformities, most of the other more disordered kaolinitic clays show derivation from the south. This did not become apparent until revealed by production planning and quality exploration in the 1980s. Where the clay mineral came from is matter for conjecture. 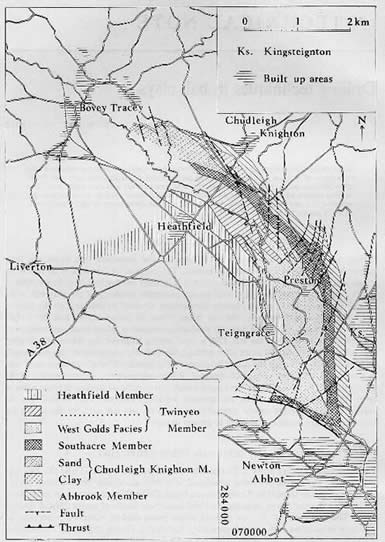 The upshot is that that the extraction areas have been mainly confined to the eastern outcrop and the southern western outcrop. The remainder of the Basin is sandy sequences with largely sideritic clays of no commercial value. The only workings in the centre are Candy’s Pit (1930’s) at Heathfield and ECC Ball Clay’s Stover Pit (1970’s). From the north the workings were Little Bradley, Chudleigh Knighton Heath, Clay Lane, Newbridge, Rixey Park, Preston Manor, Denistone, Broadway, Zitherixon (1890s), East & West Golds, Ringslade and Mainbow. 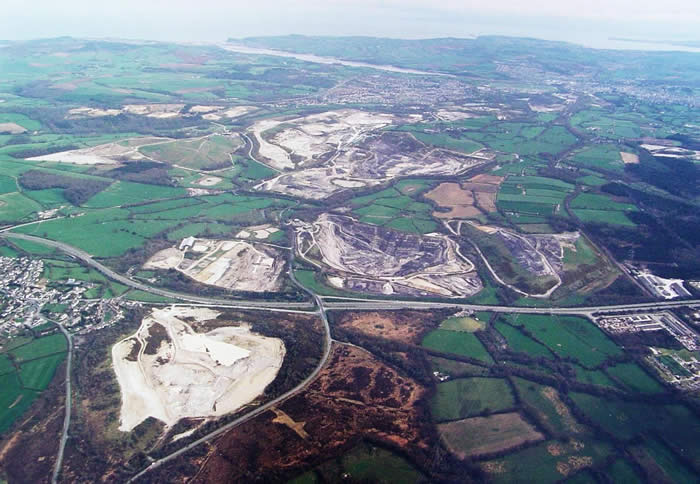 Whiteway-Wilkenson and Devon & Courtenay (Little Bradley, Chudleigh Knighton, West Golds and Decoy) merged with WBB (Preston Manor) in 1964 and Newton Abbot Clays (East Golds) was absorbed in 1969. ECC purchased Hexter & Budge (Broadway, Mainbow and Ringslade) in the 1960s and merged with Pochin Ball Clays (Newbridge). Preston Manor was and is the main area of production by virtue of the fact that it contains the Abbrook Member and upwards through the complex Group 2, Southacre and Goosehams Members, giving a wide range of specialised clay types, whilst faulting repeats the outcrops and bulges the production area to the east. WBB has now become part of the Sibelco Group.

The two ball clay basins in Devon were formed along the line of the Sticklepath Fault. The Petrockstow Basin has a more elongate shape than the Bovey Basin being about 4 miles long and about a mile wide, with a depth up to 2170ft. The sedimentation was controlled by fault movements associated with the NW-SE trending Sticklepath Fault System. Faulting divides the basin axially into a deep central trough around 670m deep with flanking shelf areas to the NE and at the south end. Fluviatile sedimentation (sands and gravels) took place in the axial trough areas, with some silty clay representing occasional overbank deposits. Later, the NW flowing river transgressed beyond the central trough area and overbank deposits, particularly in the shelf areas, became more prevalent. The sediments in the trough are mainly cyclical with upward transitional sequences from sandy gravels to smooth clays. Cyclicity is also evident in the shelf deposits, without the gravels, but containing some areas of carbonaceous clay and lignitic material. The shelf deposits are thought to be Oligocene in age. The clay mineralogy shows disordered kaolinite, illitic mica and traces of montmorillonite and was derived from the weathering of the Culm country rocks. Faulting, folding and unconformities make quarry development complicated. The North Devon Clay Co (WBB from 1969) worked the NE Shelf and Meeth Clays (later ECC Ball Clays) the SE Margin and the Wolladon Shelf. The former company’s antecedents go back to the 17th Century, but the Meeth Clay Company was not set up until the 1920s. 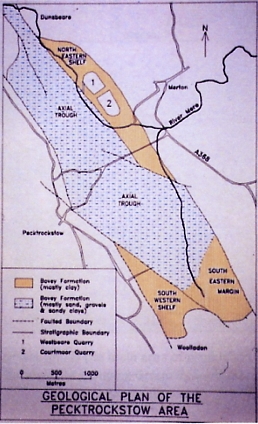 The main conclusion to be drawn from this synopsis is that the three deposits are very different from each other, even though they are grouped together under the term ‘Ball Clay’. Their main connection is that they have all been exploited for use in the ceramic industry and development has relied on that for some 2-300 years. Hence, their apparent similarity is based on use rather than occurrence. Further articles will be added to provide greater detail of each deposit and the sometimes different ways in which they were worked.