Recent Additions to our Collections

The Society is pleased to have received a number of items to add to its collections, including the following: 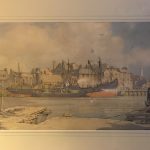 The ‘Bonawe’ loading ball clay from a barge alongside, Poole Quay, c.1920’s

eing loaded in baskets onto the vessel. The ‘clay’ must actually have been ball clay that had been transported in the barge across Poole Harbour from the Wareham basin ball clay works.  The painting shows white dust emerging from the hold suggesting that the clay must have been very dry and powdery! The same method of transferring clay from barge to sea-going vessel was employed at Teignmouth, often with the vessel moored in the harbour. The ‘Bonawe’ was owned and operated by J & A Gardner & Co. Ltd. of Glasgow, shipowners and operators of the Bonawe stone quarry on Loch Etive. The painting, which is very fine, was probably made in the 1920’s and is a rare example of a work of art depicting the production or transport of ball clay. The artist, Maurice Clarke,  may have been an art teacher at Repton and Harrow schools.