The Society continues to play an important role in preserving the heritage of the ball clay industry. Since our last Newsletter numerous talks have been given, displays mounted at various events and our website has been a valued source of information. A highlight of the past year has been the completion of the ‘pop-up museum’ and its use at Bovey Tracey Craft Festival and the Stover Canal Open Weekend – see more about this below.  Members have had several very interesting visits to Imerys’ ball clay operations in South Devon and Dorset, and have taken part in the activities described below. They have also enjoyed talks by Richard Harris on Hexter Humpherson and Sandygate Pottery, by Frederick Nicholls on Puzzle Jugs of Devon, by Ken Edworthy on the Geology of Kingsteignton and by Darrin Hewings on the South Devon Ball Clay Industry.

We have received several additions to our archive and photographic collections, and our collection of mining equipment that has been stored at the former carpenters’ workshop at Abbrook, but is shortly to be moved to more secure premises at Preston Manor, thanks to the strong support that we receive from Sibelco. We remain optimistic with the backing of the Teignbridge Local Plan and Newton Abbot Neighbourhood Development Plan, the Newton Abbot Museum will move to larger premises in the town centre, giving the opportunity for more permanent displays on the ball clay industry. Meanwhile, the restoration work on the Stover Canal is drawing attention to the long history of the industry for which it was created.

Our Society enjoyed another visit to this unique site near to Lustleigh. We were rewarded by a series of astounding restorations that had been accomplished since our last visit. In its heyday, Kelly Mine produced an uncommon form of micaceous haematite, which among other things was used in the manufacture of industrial paints to give weather resistance, “black lead” polish and in ceramics. Sadly the mine was closed down in 1951, but in the intervening years, the Kelly Mine Preservation Society (KPMS), has done much to re-furbish structures that would have been lost forever.

The bottom Adit has been re-opened and excavation continues under strict safety requirements.  Much of the ore processing equipment has been salvaged and returned to working order, using the original water power. Most impressively, the vertical shaft has been tidied up and made safe and the head gear has been totally re-constructed using reclaimed timber. Our thanks to the members of the KPMS for an outstanding morning out and for their excellent commentaries. (Geoff Hughes)

The Met Office was founded in 1854 and re-located to Exeter in September 2003.  It is an executive agency of the Ministry of Defence. Our party was split into two for the visit, which lasted around 3 hours.  We were shown the display of instruments used at the inception of forecasting, when the Met Office first came into being. The sophisticated systems in use today include the super computer suite, which is capable of performing 16 billion calculations per second! Our visit included an impressive library as well as a display of old paintings and photographs. All in all, we were very impressed by the whole visit and our thanks go to our excellent guides for their patience and explanations. (Geoff Hughes)

John Pike, Geoff Hughes and Tony Vincent visited Sibelco with Martin Milne and Clover (she is a Geography Graduate and younger than Martin who is 50 years old now). They gave us a talk at the Office (East Golds) before visiting Preston Manor. They are now using 3D SurPak rather than AutoCad. They explained what was being planned. With the B3193 now diverted, there is onward northern development of White Pit for Groups 2, 3 and 4. It will be through the road that is going to be removed in April 2016, from the north of the Southacre Sheds. Removal of parts of Binney Tip was the onward development of Southacre Quarry, which Tony advised Martin of in 1998, after the river diversion was not available. The northern end of Southacre Quarry is now worked out. We then visited Southacre Quarry, White Pit, John Acres Lane Quarry and Denistone Quarry, which Tony took photographs of, printed and included in the appropriate categories (Modes and the Prints Cabinet).

(Above) Southacre Quarry looking south. Some of the right hand side of Binney Tip was removed to enable the extraction of the Goosehams Member (Group 2 clays). Underneath that is mainly sand and the Parks and lower is the Group 1 clays interspersed with lignitic bands. The base of the quarry is mainly lignitic material, which is about 20 metres thick, before the main Group 2 clays appear.

(Above) South of John Acres Lane Quarry (SJAL) in the last decade or so was joined to White Pit through John Acres Lane. Preston Manor Works is above to the left. SJAL Quarry and the southern end of White Pit are now worked out and will be backfilled with the overburden that will be removed in the immediate future. (Tony Vincent)

The “Pop-up” Museum was designed by Mandy Biscoe & Johanna Korndorfer and was paid for by the Heritage Lottery Fund with contributions from the BCHS, Sibelco and Imerys.

The pictures of the “Pop-up” Museum are shown to the right. An additional bonus was that some new members were signed up. For a pleasant change, the weather was kind to us!

Twelve of us donned life jackets when the tide was high and boarded an inflatable at Newton Abbot Town Quay near the head of the Teign estuary. For the next hour and a half Jez Pilkington of ‘Pilkington’s Pirates’ gave us a splendid guided tour of the waterways around Newton Abbot. First we went up the Whitelake Channel under the very low Kingsteignton Bridge (ducking essential!) as far as the Jetty Marsh Basin of the Stover Canal – the quays looking impressive but in need of restoration. 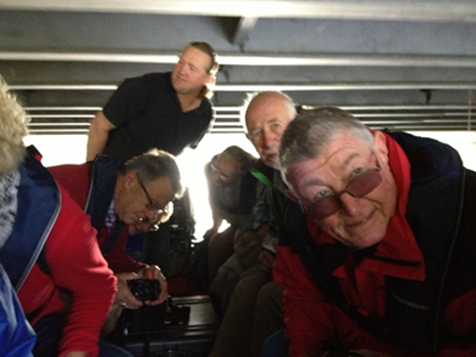 We then cruised up the River Teign past the racecourse – a rather beautiful section – and into a ’jungle’ of overhanging trees that makes the river almost (but not quite) impassable up to Teign Bridge. We next travelled up the River Lemon –somewhat claustrophobic between the high walls and buildings – as far as the Avenue Bridge, which at the then state of the tide was too low for us to pass under – so no stop-off at ASDA.

We returned to the estuary – which looked very serene – and after making a short detour up the Aller Brook, crossed to see Hackney Quay and the sea lock of the Hackney Canal. A really fascinating trip that reminded one of the importance of these waterways to the commercial history of the town from Newfoundland fisheries to coal for the power station and of course ball clay, granite and other material on the canals. (John Pike)