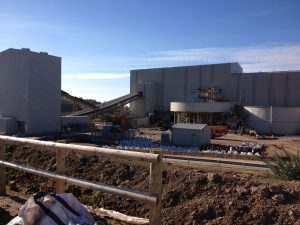 Twelve members of the Society travelled to West Devon at the invitation of Wolf Minerals for a guided tour of this new operation 12 Km east of Plymouth producing both speciality tungsten and tin concentrate. The facility employs approximately 200 operatives, many from nearby locations and is potentially one of the Western world’s largest resources of tungsten and tin ore.

Tungsten is used in a range of industrial applications including cemented carbides, steel alloys, metal cutting tools including drill bits, lighting applications and jewellery. Tungsten metal is extremely hard and has a melting point in excess of 3,000°C.

The ore body at Drakelands mine lies within and around a body of porphrytic granite known as the Hemerdon granite which is situated to the southwest of the main Dartmoor granite mass. This ore body is approximately 140m wide and drilling indicates an overall depth of some 400m below ground level with wolframite (tungsten ore) and cassiterite (silver) ore being the two sought-after minerals. Reserves are estimated at 59 million tonnes with W03 grade (tungsten) of 0.17% and Sn grade (tin) of 0.02%.

Open pit mining is used from a area measuring 800m x 400m with a terminal depth estimated at 250m. Currently, the uppermost layer of material is being removed by dump trucks and this contains quantities of waste material which dilutes the amount of recoverable wolframite and cassiterite but as this material is removed, the main ore body will be exposed which contains the higher proportion of these two valuable products. 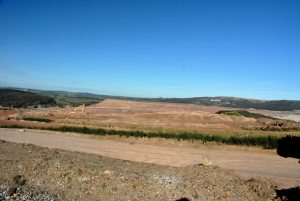 A massive settling dam has been constructed using lined waste rock and is being used to store “slimes” with the liberated water being returned to the processing plant for re-use. This dam will be further extended as more waste is deposited and forms part of returning worked out areas to nature which has already resulted in the planting of thousands of young trees, building of “bat hotels” and restoration of heath land.

The processing plant produces tungsten and tin concentrates from the crushed and ground feedstock in a wet process using gravity, heavy media separation and magnetic separators and when working to capacity will produce approximately 5,000 tonnes of tungsten concentrate and 1,000 tones of silver concentrate per annum for export to Europe, the U.S.A. and Asia. 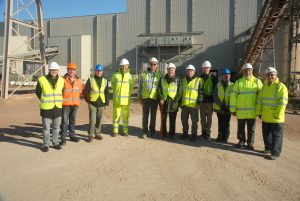 The visit concluded with and audio/video presentation and question and answering session conducted by our guide Tony Hum and a vote of thanks by John Pike.